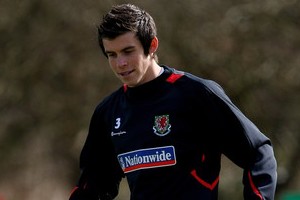 It was reported by newspapers that Bale signed a new deal in August 2008 worth around £25,000 a week, which does not expire until the summer of 2012, but his performances in helping Spurs into fourth in the League can expect to see him double his wages.

Spurs have a record of rewarding quickly excellence on the field with better terms.

Winger Aaron Lennon, expected be on the bench at Old Trafford after four months out with a groin injury, signed a new five-year deal in March 2009 which brought him closer to Spurs’ top earners, Ledley King, Jonathan Woodgate and Jermain Defoe.

Defender Michael Dawson followed suit by putting pen to paper on a contract of the same length earlier in January this year.

Spurs’ desire to ensure Bale remains at White Hart Lane for the long term marks a rapid turnaround in fortunes for the 20-year-old, who joined the club from Southampton in the summer of 2007 at the age of only 17.