Reports are out claiming that Tottenham remain in the hunt for Borussia Dortmund midfielder Sven Bender. 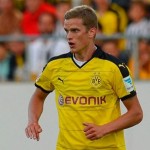 The North London club are keen to beat rivals Arsenal to his signature after both were linked over the summer.

Saturday’s loss to Manchester United highlighted the need for midfield reinforcements at White Hart Lane and previous reports suggest boss Mauricio Pochettino might need to pay £22million for the German.

Bender found himself on the fringes under Jurgen Klopp last season and could be tempted to leave the Westfalenstadion in search of regular playing time.