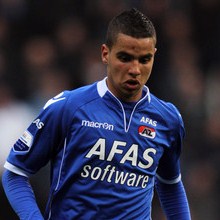 It has been reported that AZ Alkmaar midfielder Adam Maher is a target for Tottenham.

The London Evening Standard reported that Andre Villas-Boas’ solid start to his job as Spurs manager has impressed the club hierarchy and they are prepared to back him when the window opens early next year.

The 19 year old Holland international is thought to be firmly on the radar at White Hart Lane.

The youngster rejected a move to Manchester City as a junior player and is also being tracked by Arsenal boss Arsene Wenger. French Football Federation Hits Back At Girlfriend Of Samir Nasri No-One Said I Could Succeed At Arsenal – Marc Overmars