It has been reported that Tottenham have signed DeAndre Yedlin from MLS club Seattle Sounders. 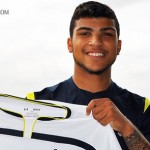 It is said that the 21-year old has penned a four-year deal with Spurs and will officially join the north London club ahead of the 2015/16 Premier League season.

USA international Yedlin, who will be loaned back to the Sounders for the remainder of the 2014 MLS season, passed a medical on the weekend and agreed to personal terms with Spurs before signing the long-term deal.

The former Sounders U23 ace said: “I’m very excited to come to the Premier League and challenge myself against some of the best players in the world.

“The facilities are the best in Europe, if not the world. It’s a great team. I’m very excited.

“It’s a great team with a new coach and a style that suits the way I play. That’s a big reason I made the decision.

“I’ve talked to (former Spurs star and current US boss) Juergen Klinsmann a lot about this move and he supports it, which was one of the big reasons behind the decision.”