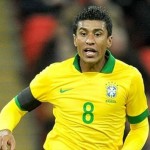 Paulinho has confirmed he is to join Tottenham during an emotional press conference in which he said farewell to his current club Corinthians.

Fresh from playing a key role in Brazil’s Confederations Cup win, Paulinho was back with his club to announce his next move.

The deal is set to cost Tottenham a reported £17m – although the Premier League club themselves have yet to confirm the deal.

“This is a very hard moment for me,” the midfielder told a club audience in quotes reported in Globo Esporte, “I have had three great years at Corinthians.

“What I have to say to the Corinthians is goodbye. Pretty soon I’ll be back, for everything you have done for me.”
Paulinho has accrued 17 caps for his country with five goals, including a late winner in the Confederations Cup semi-final against Uruguay which put the hosts through to the final.
The 24-year-old will head to Spurs having played his last game with the South American club, and says he is looking forward to the switch to Europe.
“The proposal came in, we sat down, analysed it, and took a decision on it. I’m sure that I made a great decision to go to a big club too – there comes a certain time when you need new challenges.”

Arsene Wenger Looking Forward To The Return Of Theo Walcott