Reports have emerged claiming that Tottenham have slapped a £15 million price-tag on Sandro. 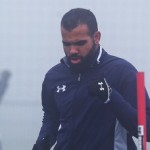 The London Evening Standard reported that the Premier League side will demand £15million if they are to consider selling Sandro.

The Brazilian international midfielder is being courted by Napoli, who need a holding player after a series of flimsy performances in the centre last season.

The former Internacional star is thought to be open to the switch to Serie A but the problem is the transfer fee, with Napoli believed to be unwilling to go higher than £9m for the 25-year-old.