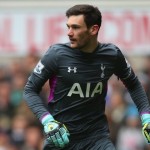 It has been reported that Tottenham are determined to ward off any interest in Hugo Lloris by upping the ante on his asking price.

Manchester United and Real Madrid are showing significant interest in the France international goalkeeper but Spurs are desperate to keep him at White Hart Lane and will look to do so by placing a £35million price tag on his head according to the Daily Mail.

Lloris, who is also a target for Paris Saint-Germain, is reportedly chasing Champions League football but Tottenham are doing everything they can to avoid losing him to a bigger club.