Reports are out claiming that Tottenham midfielder Mousa Dembele has hit back at criticism from Manchester United legend Gary Neville. 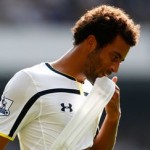 Neville blasted Mauricio Pochettino’s team after they capitulated against Newcastle United at White Hart Lane a fortnight ago to lose 2-1.

“I think we’re not weak but I didn’t hear this. I think we think differently about this,” said Dembele. “Every team has some weaknesses and we have our own things to think about.

“We need to be ready quicker, from the first minute. We did it in the first half and then in the second half we didn’t expect them (Asteras) to come at us.

“We were too relaxed and this cannot happen again. We need to speak about it.

“Personally there are some reasons why in the second half we didn’t do so well but we will talk with the team about it. A lot of people have their opinion so we will talk internally.

“We were surprised by them. It can’t happen again because we could have ended up drawing or losing.