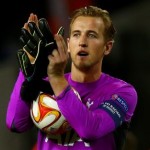 It has been reported that Tottenham striker Harry Kane is in line for a first England call.

The Mail on Sunday says Roy Hodgson is considering giving Tottenham’s England Under 21 striker a call up for the Euro 2016 qualifier against Slovenia and the friendly versus Scotland next month.