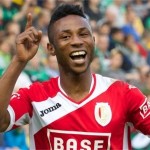 Reports are out claiming that Tottenham are interested in Standard Liege striker Imoh Ezekiel.

The Nigeria international star is being discussed at Spurs Lodge as new manager Mauricio Pochettino seeks to boost his attacking options.

He remarked recently: “I want to play one day away from Belgium. To play in the English league would be a dream come true.

“I have been linked with many teams, but a French team or an English team would be attractive to me.”