Reports are out claiming that Everton face a battle to keep hold of defender John Stones. 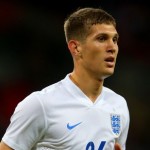 The Daily Express reported that Tottenham have leapfrogged Chelsea and Arsenal in the race for Stones after launching a fresh bid for his services.

The north London outfit have already seen a bid rejected by the Toffees, but have returned with a larger sum in order to tempt Roberto Martinez and Bill Kenwright into parting with the youngster.