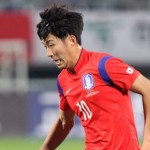 The Daily Star Sunday reported that Tottenham are leading the £20million chase for Son.

But the South Korea international is also being scouted by other Premier League clubs.

Manchester United, Liverpool and Arsenal have also checked out the attacking talent who can operate wide or through the middle.

Son, 22, was an £8m signing from Hamburg and has quickly established himself at Leverkusen.