Reports are out claiming that Tottenham are believed to be nearing a deal for Toby Alderweireld. 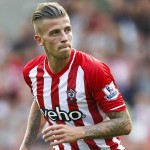 The Telegraph reports that Spurs are closing in on the Atletico Madrid defender who is being heavily linked with Chelsea.

Belgium international Alderweireld spent last season on loan at Southampton and has expressed his desire to remain in the Premier League.

It appears as he may get his wish with Tottenham set to hijack Chelsea’s pursuit after Atletico cooled their interest in taking former left-back Filipe Luis back from the Premier League champions. The Brazilian was set to be used in a player swap deal to land Alderweireld.

It is now strongly believed that Alderweireld, who is on his honeymoon in Bali, will become Mauricio Pochettino’s third signing of the summer following fellow defenders Kevin Wimmer from FC Kol and Kieran Trippier from Burnley.