It has been reported that Tottenham are ready to try again for Dnipro winger Yevhen Konoplyanka. 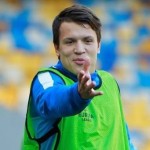 The Sunday Mirror claims that the 25-year-old is likely to leave his club Dnipro in the mid-season window and is available for around £5million as his contract expires next summer.

Spurs boss Mauricio Pochettino has indicated he is keen on Konoplyanka, who has also attracted interest from Liverpool and Inter Milan.

Pochettino believes the left-sided player will fit into his system and chairman Daniel Levy see the price tag as good value for money.