Reports are out claimign that FC Basel centre-back Fabian Schar is back on the radar of Premier League clubs. 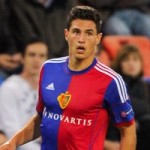 The Switzerland international defender has been a long-term target for Arsenal, Manchester United and Liverpool.

However, the Daily Star reported that Tottenham are also on the trail of Schar.

Former Spurs defender Ramon Vega has tipped off his old club about the young centre-half. James Milner Backing Liverpool To Finish In The Top Four