It has been reported that Tottenham are reviving a bid for Barcelona striker Sandro Ramirez. 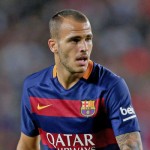 The Daily Star says Spurs are ready to abandon their pursuit of Saido Berahino to focus on Barcelona misfit Sandro instead.

West Brom fought off all attempts by Tottenham to sign Berahino last summer and a deal now looks even less likely.

So Spurs are looking at Sandro instead, with a loan deal or a £3m transfer including a buy-back clause being discussed.

Barca would prefer the 20-year-old to leave for another Spanish club, with Malaga the latest to enter the running.

But Tottenham are determined not to miss out and further talks are planned between the clubs this week.

Joleon Lescott Set To Start For Man City Against Barcelona