Tottenham Wants Emmanuel Adebayor On Loan For Next Season 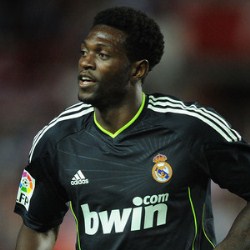 Interesting news are out and it has been revealed that Tottenham boss Harry Redknapp is ready to move for Manchester City outcast Emmanuel Adebayor.

The Mirror has reported that City want £14million for the ex-Arsenal striker, but may be prepared to loan him out if a club meets his £175,000-a-week wages.

Tottenham are interested in a one-year loan with an option to buy, but will only pay £75,000-a-week – meaning City would have to continue paying the player a staggering £100,000-a-week.

That leaves both sides miles apart, but Spurs’ next approach could be to offer a loan fee to sign Adebayor, and there is genuine hope the deal could be done.

Redknapp has no fears about taking another former Gunner to White Hart Lane, even though Adebayor is deeply unpopular with both sets of fans.

The Togo striker became a hate figure among Arsenal fans after his ugly exit from the Emirates.