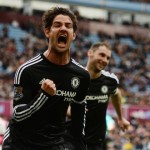 Reports are out claiming that Chelsea striker Alexandre Pato has held talks with Premier League rivals.

Pato is on-loan at Chelsea from Corinthians to the end of the season.

The Sun reported that his agent Kia Joorabchian has been negotiating with Tottenham and West Ham, should the Blues decide not to take him on next season.

Brazilian side Corinthians own the rights to the player until January 2017 and the 26-year-old is keen to NOT be forced to return to his home country at the end of the Premier League season.

According to reports in Brazil, Pato has given Joorabchian the green light to go ahead and negotiate a deal to keep him in the Premier League.

William Gallas To Wear No.13 At Tottenham Hotspur