It has been reported that Tottenham winger Erik Lamela has been hit by an injury setback. 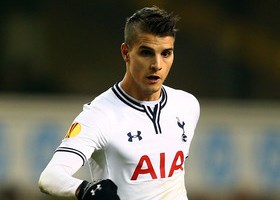 The Daily Mail revealed that the Argentine international has not appeared in 2014 and a thigh injury which has troubled him since he was an unused substitute at Manchester United on New Year’s Day has developed into a back problem.

Tim Sherwood refuses to rule him out for the season but it is another bleak episode in a sorry debut season for the 21 year old signed from Roma last summer for a club record £30million.