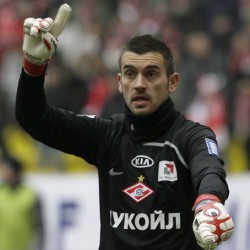 More transfer news are out and it has been reported that Tottenham’s deal for Croatia goalkeeper Stipe Pletikosa has stalled.

The Daily Mail reported that Pletikosa’s move to Tottenham Hotspur is on hold amid uncertainty over the future of Spartak Moscow boss Valery Karpin.

The Croatia No 1 has been frozen out at Russia’s biggest club because of Spartak’s difficulties in staying within a limit on foreign players in their domestic league.

It is said that Tottenham have long tracked Pletikosa and agreed a deal to sign him last August before a serious knee injury scuppered the deal.

Harry Redknapp again admitted at the weekend that a new move was on the agenda, but Spartak are now understood to favour cashing in with a permanent transfer rather than the initial loan preferred by Spurs.

However, there are those in Moscow who believe Pletikosa should be restored to the starting line-up after a poor start to the season for the club.