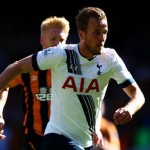 It has been revealed that Tottenham striker Harry Kane says he’s happy to ignore rumours linking him with Manchester United.

The England international is being linked with a £45 million move to United.

The former Leyton Orient loan star said: “Spurs is where I’m at and where I plan to be for a very long time.

“We’ll be looking to win some good trophies in the future. I want to keep progressing and keep getting better. This season has been crazy and more than what I ever expected to do so early on but it’s happened, and it’s how you deal with it.

“I am hoping to go on and win many trophies for Spurs and for England. That’s always been the aim since I was a kid, dreaming of lifting the trophy one day for them.”