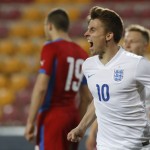 Reports are out claiming that Tottenham midfielder Tom Carroll proved the matchwinner for England U21 in victory over the Czech Republic.

England have spent the week in Olomouc to familiarise themselves with the place they will call home in June for the U21 Euros.

Carroll, who was captain on the day, struck three minutes after halftime.

Arsenal defender Calum Chambers surged forward and zipped in a cross that Tomas Kalas – the Chelsea defender on loan at Middlesbrough – failed to clear and Carroll took advantage, sweeping in from eight yards.