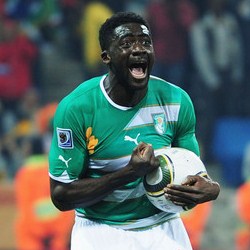 The Argentine international striker has been linked with a move to Inter Milan after he considered his future earlier this season.

However Toure said: “Carlos is very happy to be here. The fans love him and he’s scoring. He’s helped put us where we are.

“He’s from Argentina! He has a big heart. That’s why we love him. He’s a really special player.”