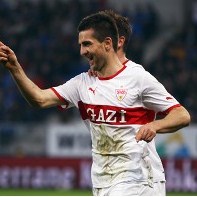 Vedad Ibisevic scored twice on his return to his former club to earn Stuttgart victory in a Baden-Wurttemberg derby at Hoffenheim on Friday night.

Ibisevic, 27, who spent almost five years with Hoffenheim before leaving in January, gave Stuttgart a 2-0 half-time lead, with Sejad Salihovic’s penalty not enough to prevent the hosts from losing their second game in a row.

The win moved Stuttgart above Hannover and up to seventh place in the Bundesliga, which could be good enough for a place in the Europa League next season.