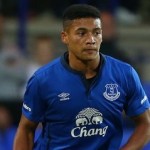 It has been reported that Everton defender Tyias Browning has signed a new contract.

The England U21 international has signed a new three-year deal at Everton.

“I’ve been here since I was a kid and this new deal shows the faith that the manager and staff have in me.

“I’ve loved being around the first team. I’ve learnt so much and I’m ready to kick on when called upon.”