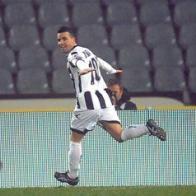 Celtic’s Europa League campaign ended despite a valiant effort against Udinese in their thrilling Group I game in the Stadio Friuli which ended 1-1.

The visitors, needing victory in the final fixture to go through into the knockout stages, deservedly took the lead in the 29th minute when Gary Hooper took advantage of a mix-up in the Udinese defence to tap in from a yard out.

However, veteran striker Antonio Di Natale notched from close range himself with seconds remaining in the first half after Celtic defender Cha Du-ri inadvertently headed into his path.

The second half was drama-filled with Neil Lennon’s side playing their part in an enthralling game but in the end, the draw was not enough.

Celtic travel to St Johnstone on Sunday looking to close the gap on Clydesdale Bank Premier League leaders Rangers and they will be buoyed by their spirited performance against a side who are only behind Juventus on goal difference at the top of Serie A.