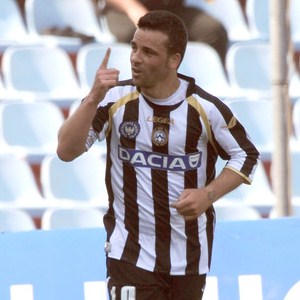 Antonio Di Natale struck twice in the first half to fire 10-man Udinese to a 2-1 victory over Lazio and lift the Bianconeri over the Roman club and into fourth place.

The Italy international opened the scoring in the 35th minute before adding his second shortly before half-time.

Gabriele Angella, who brought down substitute Tommaso Rocchi inside the area for Lazio’s penalty, was shown a straight red in that episode.

Lazio substitute Libor Kozak reduced the deficit in the 76th minute and was denied his second shortly after when his powerful header hit the post.

The result has allowed the Friuli club to go two points clear of Lazio and Roma with two rounds of games remaining.