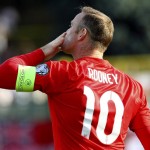 England secured qualification for next summer’s European Championships in France after a convincing 6-0 win over San Marino at the Olympic Stadium in Serravalle.

Wayne Rooney netted the opener from the penalty spot to go level on 49 goals with Sir Bobby Charlton as England’s all-time record scorer, and the Manchester United captain has a chance to claim the record for himself in Tuesday’s Group E qualifier against Switzerland at Wembley.

The Sammarinese part-timers, who secured a first-ever point in a competitive match in November’s goalless draw with Estonia, defended stoutly in the first half and went into the break with just a two-goal deficit following Rooney’s penalty and Cristian Brolli’s own goal.

However, Pierangelo Manzaroli’s side visibly tired in the second half, as England’s superior technical ability and fitness told.

Everton playmaker Ross Barkley scored his first senior international goal 15 seconds after the restart, then Theo Walcott netted twice and fellow substitute Harry Kane also got on the scoresheet as England became the first country to qualify for the 2016 finals.

England’s seventh consecutive Group E win sees Roy Hodgson’s side progress to the Euro 2016 finals with three matches to spare, as third-placed Slovenia can now only match England’s 21 points and Srecko Katanec’s side have an inferior head-to-head record.