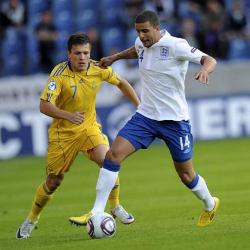 England’s Under-21 European Championship campaign requires a weekend win against the Czech Republic for it to continue after a dull 0-0 draw with Ukraine in Herning.

The Eastern Europeans enjoyed the better of the first half and it required Manchester United’s fledgling pairing of Chris Smalling and Phil Jones to put in a strong defensive performance.

Danny Welbeck missed England’s best chance when put clean through Daniel Sturridge, who also hit the crossbar, but Ukraine might have won it, with Frankie Fielding keeping out Roman Zozulya’s late effort.