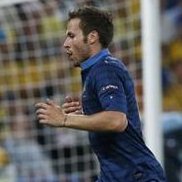 Sparkling attacking football and goals from Jeremy Menez and Yohan Cabaye earned France a 2-0 win over Ukraine in their Euro 2012 Group D match after the game was halted for 55 minutes due to a thunderstorm in Donetsk.

utch referee Bjorn Kuipers took the players off the field in the fifth minute after thunder, lightning and torrential rain descended on the stadium and it was almost an hour before play resumed, with the surface having dried out remarkably quickly.

The win put France on four points, one ahead of the co-hosts who failed to find the form that brought a 2-1 victory over Sweden. England, who followed up their opening draw with France with a 3-2 win over the now eliminated Swedes later on Thursday, also have four points.