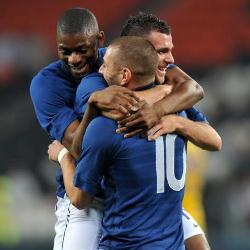 Marvin Martin scored twice in three minutes on his debut as France finished the season with an emphatic friendly win over Ukraine.

Martin scored in the 87th and 90th minutes as the visitors put a gloss on a scoreline which was not a true reflection of the game.

All the goals came in the second half with Anatoliy Tymoschuk putting Ukraine ahead before Kevin Gameiro equalised five minutes later.

The game appeared to be heading for a draw before Martin’s double intervention which sandwiched a goal by Younes Kaboul, also on debut.

The result means France end the season on a high after their disappointing 1-1 draw with Belarus in their Euro 2012 qualification campaign at the weekend.

David Beckham : I Am Not Guaranteed To Go To South Africa