It has been reported that Continental clubs are queuing for unsettled Arsenal striker Joel Campbell. 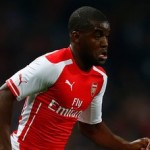 The Daily Express says AC Milan, Olympiakos and Galatasaray are all interested in saving Campbell from his Emirates misery.

The European trio have all expressed interest in signing the Costa Rica international on-loan during the January transfer window.

And have had their chances boosted by the players obvious discontent in North London.

Campbell is desperate to leave Arsenal having been shunned by Arsene Wenger for much of his career, and handed a distinct lack of first-team opportunities this campaign.