It has been reported that unhappy Barcelona midfielder Cesc Fabregas wants out and is ready for a return to England this summer. 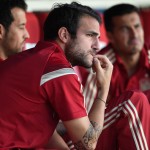 Sky Sports reported that the European champions are willing to sell the Spain midfielder as he does not figure in their plans for next season.

It is understood that Fabregas has a £30million release clause written into his contract.

The 27-year-old is expected to interest a number of top Premier League teams, including his former club Arsenal.

Manchester United could be another destination following the attempts of executive vice-chairman Ed Woodward to sign him last summer.