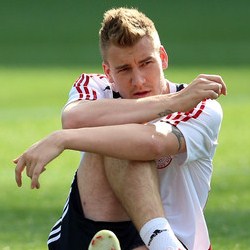 Reports have emerged that Nicklas Bendtner is unhappy at Arsenal as a summer departure looks more likely.

The Denmark international striker is looking to move on from the North London club after struggling to gain regular football over the last few seasons which included a season-long loan to Sunderland last term.

It is said that the 24 year old is keen to move to a club where he can play Champions League football but also wants to ensure that he and his family are happy.

Bendtner told Sporten.dk : “Secondly I need to be happy. A lot of people think that it is all about the money, but money does not matter if you are not happy,”.

“I have been in a situation before where I made a lot of money without being happy. I need to be happy when I come in which is universal for everyone.

“You need to be excited to come in to work.” Atletico Coach Simeone Pleased With The Form Of Antoine Griezmann

Demba Ba Injured by Boot to the face by Coloccini – Video