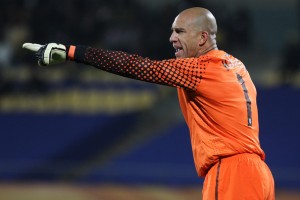 USA goalkeeper Tim Howard will be assessed prior to their second World Cup group stage match against Algeria.

The Everton stopper injured his ribs in a collision with England striker Emile Heskey in the 1-1 draw in Rustenburg on Saturday but will be treated with caution as the USA prepare for their match in Johannesburg on Saturday.

“He’ll be evaluated later today and then a decision will be made as to whether he’ll need further tests,” said head coach Bob Bradley. “Obviously he was sore – did a great job of taking a tough hit, and staying in it and playing really well. But we’ll assess him later today and figure out then what we need to do from there.”