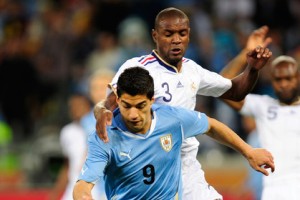 France and Uruguay played out a goalless draw at the Green Point Stadium in the second Group A game on the opening day of the World Cup.

Uruguay were forced to play the final nine minutes of the match in Cape Town with 10 men following the dismissal of substitute Nicolas Lodeiro for a second bookable offence.

Substitute Thierry Henry had a late penalty shout for handball dismissed as lacklustre France finally took the game to their opponents, but failure to capitalise on their numerical advantage ended in a disappointing stalemate.

The draw means that neither side took advantage of hosts South Africa’s 1-1 draw with Mexico in the day’s earlier game to move top of the group, although Uruguay’s Oscar Tabarez will likely be the happier of the two managers.