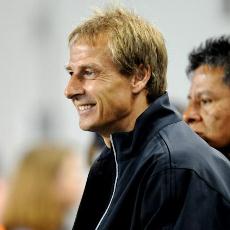 The Juergen Klinsmann-coached United States came crashing back to earth on Tuesday after Ecuador scored a late goal to win their friendly 1-0 at the Red Bull Arena in New Jersey.

The U.S., who gave Klinsmann his first win as coach with a 1-0 victory over Honduras at the weekend, slumped to their third loss in five games under the German’s attack-minded direction after Jaime Ayovi headed in a cross from team mate Walter Ayovi in the 79th minute.

Klinsmann pledged to turn the U.S. into a more offence-driven side after taking over from Bob Bradley in July, but the transition is yet to show on the scoreboard, with only two goals produced from the last five games.

Still, Klinsmann was encouraged by what he saw on Tuesday, particularly in a first half that featured a number of promising forays before Ecuador lifted after the break.