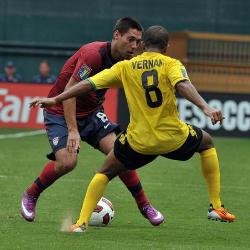 The United States scored twice in the second half to beat a 10-man Jamaica side 2-0 and advance to the semi-finals of the CONCACAF Gold Cup.

Jermaine Jones broke the deadlock when he scored four minutes into the second half after his shot took a deflection off Jamaican defender Jermaine Taylor, giving goalkeeper Donovan Ricketts no chance of making the save.

Jamaica, which did not concede a goal in the pool stages, were reduced to 10-men when Taylor was red-carded for tripping Jones as he was bearing down on goal.

American striker Clint Dempsey, who only rejoined the team the morning after attending his sister’s wedding in Texas, put the result beyond doubt in the 80th minute, side-stepping the advancing Ricketts and tapping the ball into an open net after a low cross from Juan Agudelo.