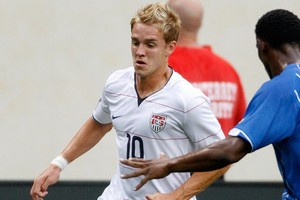 USA international Stuart Holden has signed a deal with English Premier League outfit Bolton Wanderers that will see him stay with the club until the end of the season.

The 24-year old midfielder has been on trial for the last few weeks and has now been given his second chance in the Premier League after an unsuccessful stint with Sunderland in 2005.

The former Houston Dynamo man will now fight for a spot in Owen Coyle’s first team as the Trotters strive to climb up the top flight table.

Coyle told reporters that there is an incentive for Stuart to try to get himself in the team.

Coyle also said that the player has had a little thigh knock for the last three or four days which has curtailed his training a little bit.

However Coyle said that the midfielder did very well in the first week and he comes looking to push his career on.

The former Burnley manager also said the Stuart has done very well in the MLS and is desperate to continue that development.

Coyle then ended by saying that Stuart has the hunger, desire and the ability and ultimately when he ‘is fit, he will show everyone what he has got.