Reports are out claiming that US Soccer are seeking an exception to a FIFA rule which would allow Gedion Zelalem to play for the USA national team. 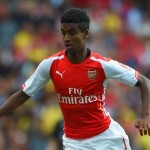 The 18-year old Arsenal prospect was born in Germany but has US citizenship which he received last month after growing up in Maryland.

The US team was under the impression that Zelalem would be eligible to represent his adopted country but a FIFA ruling states that he will have to live in the States for five years before he can step out for Juergen Klinsmann’s side.

Zelalem is a naturalized citizen, not through lineage or birthright, which would deny him the opportunity to play for the US but federation president Sunil Gulati suggests there will be a way around the regulation.

“We’re going through the FIFA process and hope to have Gedion eligible by March or April,” Gulati told ESPN FC. “We don’t expect any issues.” Monaco Deserved To Go Through – Arsenal’s Per Mertesacker