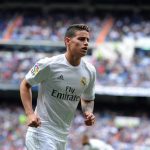 He was an unused substitute during Real’s goalless draw with Manchester City in their Champions League semi-final first-leg on Tuesday night.

Valderrama as hit out at Zidane’s treatment of Rodriguez as speculation surrounding his future goes on.

“Even if he (Rodriguez) scores three, four or five goals, Zidane won’t put him on,” Valderrama said.

“James is a player he does not like. Carlo Ancelotti put him on and he played well, and then later with Benitez, but not with Zidane.

“So we do not understand what is happening with him.”

Manchester United, PSG and Arsenal have been linked with James.