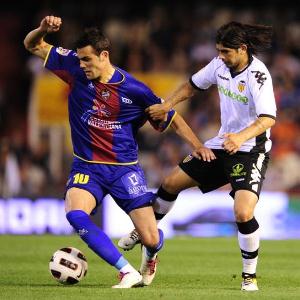 Valencia ensured third place and an automatic berth in next season’s Champions League when they drew 0-0 with city neighbours Levante and nearest rivals Villarreal lost 3-1 at home to Real Madrid in La Liga on Sunday.

Valencia have 68 points from 37 matches, six ahead of Villarreal, who are assured of fourth and go into the qualifying round for Europe’s elite club competition.

Second-placed Real are 21 ahead of Valencia and four behind Barcelona, who were crowned champions for a third straight season on Wednesday and showed off the trophy to their fans at a festive Nou Camp after a 0-0 draw with Deportivo Coruna.

Valencia coach Unai Emery said he was not sure whether he would continue in his post next season despite securing the club’s second third-place finish behind Barca and Real in a row.