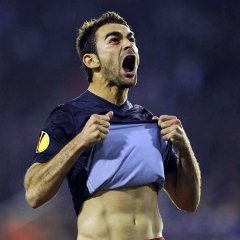 A brilliant goal from Adrian Lopez saw Atletico Madrid win 1-0 at Valencia, completing a 5-2 aggregate victory to put them in the Europa League final for the second time in three years, where they will face fellow Spaniards Athletic Bilbao.

After soaking up an hour of pressure from the hosts, Atletico ended the tie as the former Deportivo striker expertly controlled the ball on his chest before rifling an unstoppable half-volley into the top left corner.

The match was soured by a needless sending off for Tiago, who lost his temper and slapped Roberto Soldado after mistakenly believing the referee had awarded a penalty to Valencia in the closing stages: no such decision had been made, and the Portugal midfielder now misses the final.