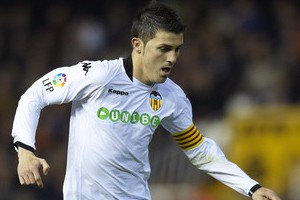 David Villa struck both goals as 10-man Valencia held on to beat Getafe 2-1 at the Mestalla. Spain international Villa netted twice in a 12-minute spell either side of half-time to put third-placed Valencia 2-0 up and seemingly in total control.

However, the 61st-minute dismissal of Valencia defender Alexis gave Getafe a lifeline and the visitors then pulled a goal back through Manu del Moral to leave their hosts facing a nervy final 14 minutes.

Unai Emery’s side survived though, and the win sees them extend their lead over fourth-placed Sevilla back to four points.