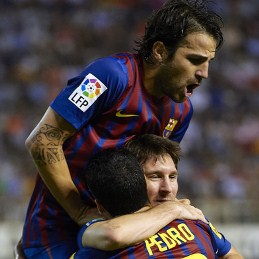 A late Cesc Fabregas goal salvaged a 2-2 draw for Barcelona against Valencia in an entertaining La Liga match at the Mestalla.

Valencia opened the scoring after just 12 minutes when Jeremy Mathieu surged down the left and hit a low cross into the space between the Barca defenders and Victor Valdez. The retreating Eric Abidal nudged the ball past Valdez and into the bottom corner when really he should have done better.

The lead was not to last long though. Just 90 seconds later Fabregas back-heeled a first time pass to Lionel Messi, who threaded a wonderful little ball between centre and left-back. Pedro, running in from the wing, put the ball past Vicente Guaita at his near post.