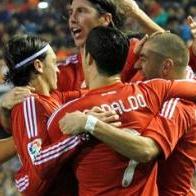 Real Madrid went back on top of La Liga with a thrilling 3-2 win at fellow title-chasers Valencia.

After Barcelona’s 4-0 win at home to Real Zaragoza briefly put the defending champions top on goal difference – and with Los Che knowing a win would put them a point behind the Liga leaders – Madrid almost played the perfect tactical game as goals from Karim Benzema and Sergio Ramos put them 2-0 up.

Former Real striker Roberto Soldado pulled one back for the hosts soon after Ramos’s goal, but that was swiftly followed by yet another strike from Cristiano Ronaldo – his 14th in La Liga this season – after Valencia keeper Diego Alves went walkabout.

But the night was not done as Soldado snatched a poacher’s second, setting up a grandstand finale that saw Real hold on – just, as Aritz Aduritz fired straight at Iker Casillas, while Soldado had another sublime finish ruled out for offside and hit the bar in the final seconds.

The victory puts Madrid three points clear of Barca, with Valencia in third four points behind Jose Mourinho’s side.