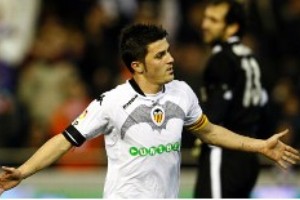 Valencia edged to within three points of second-placed Real Madrid with a convincing 4-1 win over 10-man Villarreal at the Mestalla.

A David Villa brace and goals for Ever Banega and David Silva gave the hosts victory, with Nilmar on target for their local rivals.

Los Che started the match at a frantic pace and Argentine midfielder Banega opened the scoring on six minutes, smashing the ball into the roof of the net from 18 yards after excellent work from Villa and Silva down the right, his first goal for the club.

Villa doubled the lead from the penalty spot 22 minutes later after Kiko was shown a straight red card for pulling the Spain striker down after his defensive error let him in.

Joaquin and Juan Manuel Mata went close to a third before Silva drilled a 56th-minute finish into the bottom left after Joan Capdevila failed to clear Jeremy Mathieu’s low cross.

Nilmar pulled one back for El Submarino Amarillo after a misunderstanding between defender Alexis and keeper Cesar gave the Brazilian a tap-in, as the match opened up into an end-to-end showcase.

Silva was denied a second by a brilliant stop from Diego Lopez after slick play involving Villa and Mathieu, while for the visitors substitute Giuseppe Rossi fired wide after Nilmar put him through.

Villa went close to getting his second but fired wide, Miguel forced a superb stop from Lopez with a spectacular shot from the right wing, while Silva and Mata had late finishes overruled for marginal offsides.

The win was sealed when Villa made it two for him and four for his team in injury time, firing into the roof of the net in injury time after a one-touch move with Mata and Silva.

The win puts Valencia one win behind Madrid, although with a far inferior goal difference. Vllarreal stay 10th.

Beckham : I Will Continue Playing After World Cup