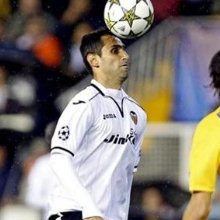 Valencia completed a Champions League double over BATE Borisov to stay level on points at the top of Group F.

Goals from Jonas Oliveira and Roberto Soldado in four first-half minutes, the latter from the penalty spot, put the Spanish side on top at the Mestalla.

The win takes Valencia to nine points from four games, but they remain second behind Bayern Munich, having lost 2-1 at the Allianz Arena in September.