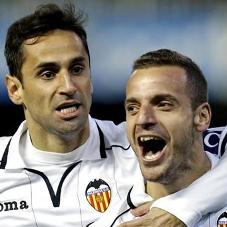 Ernesto Valverde got his first home win since taking charge of Valencia as Los Che saw off Getafe 4-2 in a hugely-entertaining encounter at the Mestalla.

The hosts got off to the perfect start and were 2-0 up inside seven minutes as Roberto Soldado headed in from Sofiane Feghouli’s cross before the Valencia captain turned provider to set up Jonas to curl past Miguel Angel Moya.

Getafe soon had a foothold in the game, though, as Alvaro Vasquez turned in Xavi Torres’ pass from a narrow angle, but Valencia restored their two-goal advantage on the half hour as Ricardo Costa powered home a header from Tino Costa’s corner.

Alexis reduced the deficit once more on the hour mark with another fine header, this time from Abdelaziz Barrada’s corner, but as Getafe pushed for an equaliser they only succeeded in leaving space at the back and Valencia finally sealed the three points when Nelson Valdez swept home Jonathan Viera’s cutback in stoppage time.

Consecutive home defeats had seen Valencia fall seven points off the pace in the race for the final Champions League place, but they ensured a perfect end to an up-and-down 2012 with a blistering start.