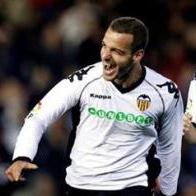 Aritz Aduriz scored the winner in the final minute to hand Valencia a fortunate 4-3 home win over nine-man Malaga in La Liga.

Juan Mata’s 16th minute penalty cancelled out Rondon’s 10th minute opener for Malaga at the Mestalla before Rondon grabbed his second of the game with an opportunist strike on 35 minutes to restore the visiting side’s lead.

Malaga were reduced to 10 men when Martin Demichelis was red carded for hauling down Mata that led to the home side’s penalty equaliser.

They were reduced to nine men when Helder Rosario was sent packing for foul and abusive language aimed at an assistant referee with the score level at 2-2.

Goals from half-time substitutes Roberto Soladado on 53 minutes and Ever Banega 14 minutes later seemed to have completed the home team’s recovery only for Julio Baptista to thump home a superb shot from outside the box on 79 minutes for the nine men.

Aduriz won it for Valencia when he thumped home Soldado’s cross in the dying seconds to ensure Valencia move into third place in the table a point above Villarreal, who host Real Sociedad on Sunday.